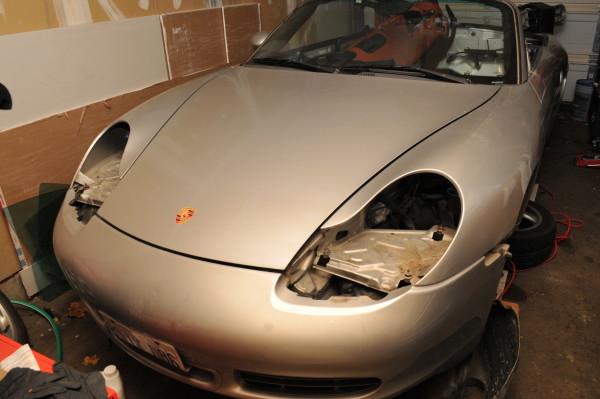 I had a bit of an accident that set me back a week or so, but I’m back on track now. Below I posted some recent car pics.

I bought some sheet aluminum for $20 and made a firewall cover. I wish I had fitted the seats first because there isn’t enough leg room for me at the moment. I will have to add a bit of an angle to the cover in order to move the seats farther back. I mounted the hand brake housing just above the “tranny tunnel” just to simplify things. Putting it where Renegade does is a pain, and it requires twisting the wire a little more than I like.

I also got a new intake manifold due to some serious defects in the old one. A 1-3/8″ freeze plug from Napa worked great to plug the EGR opening. The car is 95% done at this point. I’m just waiting on a couple of intake parts and need to get the exhaust made. I am also looking to install a fire suppression system in the trunk.

The big things to do now is get insurance, safety, and emissions done. A bunch of random stuff I forgot to post about

I picked up an $50 starter from a local scrap yard which came off a 2005 Silverado. The Kennedy Engineering adapter plate was designed around LS1 starter, so I had to make some modifications. The moulding in the dome is a little bigger I guess… I spent a good hour filing away, but eventually I got it to fit. The reason I got a truck starter over LS1 is because it’s cheaper and I heard LS1 starters  tend to crack. I didn’t want to start the engine without priming it, so I purchased a drill pump at Princess Auto for $15. One end of the hose clamps onto the filter threads on the oil pan and the other into a jug of oil. This pump has no problems reaching 45 PSI. I stuck a gauge on my remote mount oil pressure switch hose (I will eventually post part numbers and pics for this part).

As for the tranny, I called Porsche about gear oil, which they quoted me at $55 a liter!!! I ended up purchasing some Swepco 201 which is manufactured locally, but surprisingly difficult to find. The engine cover still fits, but it had to be cut a bit to make room for the throttlebody. Rennline hooked me up with a wicked deal on their racing floor boards. I really didn’t want to put carpet back in this car, so these things are great. I also gotta thank Corbeau for hooking me up with a deal on these FX1 Pro seats and rails. My friend started working on the brackets the other day while I was making brake lines. I noticed a crack on the rear subframe side section where it mounts to the body. It seems like it was put together with a bent stud by the previous owner that caused it to crack. While taking it off, one of the lower control arm bolts got stuck inside the bushing and pretty much pulled it apart. This was a huge pain in the ass, but at least I got a sweet deal from Woody for the replacement. Pretty much all the brakes lines are gone on this car. I tried making some hard lines out of the copper-nickel stuff, but had a hard time getting them to flare properly. I ended up buying some poly vinyl fluoride coated metal lines from NAPA. This stuff is great, they flare perfectly and are easy to bend. I would also recommend Lisle tube pliers if you plan on doing any kind of brake line work. The shell came with no headlights, but luckily I was able to pick up a decent set for $150 CAD. The lenses were so bad though, that I decided to take them out altogether. Somehow I didn’t notice that I purchased mismatched headlights until I put them on. One is painted silver, and one isn’t. The wiring on this project just doesn’t stop… The entire harness in the trunk had to be replaced. The previous owner was building a track car and cut half the stuff off. He even cut the ABS/speed sensor, which I don’t think he was supposed to. Thanks to Woody on the 986 forum I was able to pick one up for cheap. The engine harness was a bit of a pain to tear up since the Porsche diagrams are a huge pain in the butt to read. Most of the connection pins come out easily, but for some you need to make a special tool. BTW if you need any help with the wiring, just send me an email. The pins on these types of connections will not come out easily. You need to remove the back cover and stick in a think metal tube (you can make one from a pop can) through the front of the connector, between the plastic and the pin. Pushing the pin forward from the back while inserting the tube makes it much easier to take apart.

I’m slowly making some progress cleaning up the wiring. I used a couple of no longer needed relays to power the GM PCM and the water pump. The GM PCM is massive and won’t fit on the firewall like the Porsche DME. I had a sheet of aluminum kicking around so I made a mount. I don’t have the latest picture of the wiring, but it is starting to look pretty clean.